Around this time of year, people are putting the final touches on their beach bodies. Us? We’re more concerned with eating – and eating well. As summer gets closer and closer, we’re turning our attention to seasonal staples like burgers. Where can you find a good burger in Hollywood? Plenty of places: 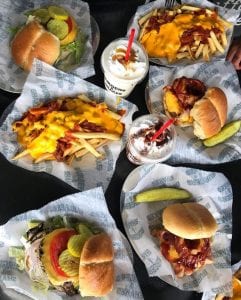 Don’t let the basic name fool you: This place takes its burgers seriously. The menu is concise, but what it lacks in options, it more than makes up with taste. While you could go for a basic cheeseburger and leave happy, branch out. A BBQ burger livens up the classic with an onion, Applewood bacon and the eponymous sauce.

Not in the mood for red meat? There’s a tasty veggie burger available, too, along with a chicken and avocado option that’s sure to make your cardiologist happy. If the diet isn’t a concern for you, wash everything down with a chocolate shake or the Oreo shake. Dozens of beer are also up for grabs – after all, it’s 5’o clock somewhere. 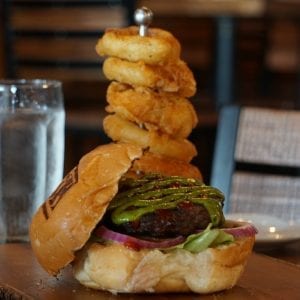 If you eat with your eyes AND mouth, HBK Burger is the spot for you. Fair warning: the portions are gigantic – so much so that you may be better off just splitting one burger between two people. You can’t go wrong with the Beggin Burger, which comes topped with a fried egg and bacon. Beef isn’t the only protein, as you’ll find lamb and veggie selections on the menu as well.

Just be aware that the big flavours and sizes command a higher premium. Burgers can clock in at the $20 range, but again, one burger can easily feed two people. Service is super friendly, and if you’re in a rush, they’ll get you out in a jiffy. HBK Burger checks all the boxes when it comes to stellar customer experience. 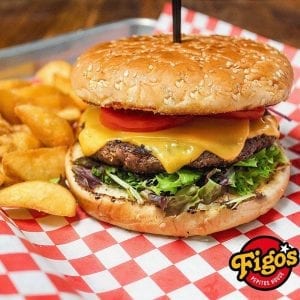 Figo’s Pepitos House’s burgers tend to fly under the radar, especially since the Venezuelan spot is known for its namesake open-face sandwiches. But customers who look past the signature selections will be rewarded with an array of hearty burger options. These options include the Black n’ Blue – a crumbled bleu cheese, arugula and grilled onion creation – and the Loaded Burger with mac and cheese, tater tots, bacon and cheddar cheese.

Our favourite, though, is the Caracas Burger. It’s a lot: beef patty, smoked pork chop, grilled chicken and bacon topped with lettuce, onion, tomato, cheddar cheese and egg – say that three times fast. It’s a beast and seems like it would just be a hodgepodge of flavours, but it surprisingly works. Just be sure to hit the gym before or after you take this monstrosity on. 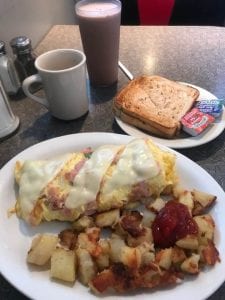 A lot of the burgers we’ve listed contain practically the kitchen sink. What if you just want something no-frills and down to earth? Enter Jack’s, Hollywood Diner.

This neighbourhood institution doesn’t really use any fancy ingredients. You can get “just a burger” (no fries) or get a double burger deluxe or bacon and cheddar burger if you’re feeling fancy. There’s not much else to the burgers here, and we’re fine with that. Best of all, most of the selections ring up at under 10 bucks – just a burger is only $5. No matter the time of day – Jack’s is open 24 hours – they have your craving covered. 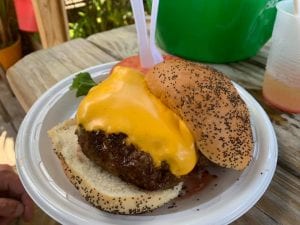 Just like Jack’s, Le Tub is known for its low-key vibe. Come as you are, and scarf down their famous Sirloin burger, which was featured on The Oprah Winfrey Show and GQ Magazine. For $11, you get a 13 oz. ground top sirloin with lettuce, tomato and onion. That’s A LOT of meat for that amount of money. You can add cheese for an extra 50 cents (Swiss cheese for a dollar).

Unlike the other spots on this list, it’s the only burger on the menu. If you do want something a little more creative, you’re better off looking elsewhere (or enjoying the restaurant’s many other items like barbecue ribs, mozzarella sticks and clams).  There’s a reason this place has been around for more than three decades on A1A: good, cheap eats.

At first glance, this Mediterranean restaurant seems like the last place you’d order a burger. But if you actually do order one, you’ll be pleasantly surprised. The eatery’s namesake creation is a satisfying mix of Monterey Jack cheese, fried egg, avocado and turkey bacon. 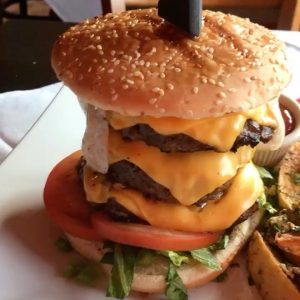 If you don’t feel like throwing your diet aside, there is the classic cheeseburger available for $8.95, too. They’re joined on the menu by another American classic: the cheesesteak. You really can’t go wrong with either. Just keep in mind that you’re better off enjoying these selections during lunch. While they are available at dinner, the burger and cheesesteak will have a $5 surcharge attached to them.