Hotel restaurants tend to get a bad rep. Because they’re just one part of a giant operation, hotel restaurants sometimes don’t get as much attention as other aspects of a hotel guest’s experience. It’s a shame because, with the right TLC, a hotel restaurant can really shine.

Case in point: Many Hollywood hotel restaurants are helping transform Hollywood’s ever-growing dining scene. The next time you’re in town, consider popping into one of these awesome eateries (and maybe stay the night, too).

For delicious Italian food in Hollywood, Olivia at CIRC sets the bar pretty high. There are A LOT of options, so even the pickiest people in your party should find something to their liking. For example, there are just under 10 appetizers to choose from. 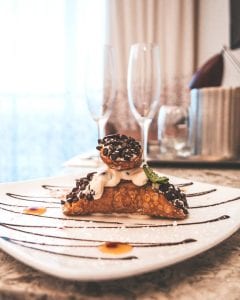 We’ll make the decision easy for you, though: Get the anything with the word “mozzarella” in it. The mozzarella caprese, in particular, is a standout; what’s not to like about a cheese tower? Feel like splurging? Go for the mozzarella bar experience with toppings galore. Those not feeling like eating cheese can opt for a stellar salmon carpaccio; it’s a beauty.

Entrée-wise, there are items like focaccia, flatbread and meats, but the kinds of pasta are the real stars here. The manicotti and lobster ravioli are among the highlights in this short-but-sweet menu section. Speaking of sweet, you HAVE to get the tiramisu – diet is damned.

You’ll be hard-pressed to find a better Asian dining experience than the one at Kuro inside the Hard Rock Hotel and Casino. This Japanese eatery can get pricey fast, but it’s oh-so-worth-it. Just one taste of items like the shrimp tempura, otoro and Hamachi should be enough to convert you. We recommend the “Chef’s Choice Sashimi Omakase”; for $50 and 16 pieces, it’s a steal. There’s also the Sushi Omakase for the same price (one roll, 12 pieces)

KURO is not all sushi, though. Robata charcoal grill options abound, as do sea and land selections like halibut cartoccio and koji lamb. Desserts include sesame panna cotta, mochi cake, Japanese doughnuts and apple tobanyaki. You should not leave without trying at least one. The same goes for the cocktails; the Hachi with mushroom-infused bourbon is a must if that’s your spirit of choice. In fact, all the signature cocktails are divided into five sections depending on the taste: sweet, sour, umami, salty and bitter.

Point Royal at The Diplomat

There’s some serious star power behind Point Royal at the Diplomat. Chef Geoffrey Zakarian is the man behind the coastal cuisine juggernaut, which boasts an impressive array of seafood options. The raw bar is a highlight of the menu; the section features oysters on the half shell, half Maine lobster, Key West shrimp cocktail and several other goodies. If you have the budget for it, choose one of the grand platters that come with a majority of the section items. 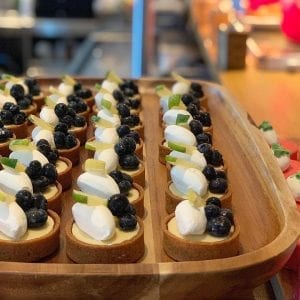 Mains also include a lot of fish, such as grilled branzino, Atlantic tuna steak and local black grouper. Don’t worry if you’re not a fan of seafood – plenty of other selections are available for discerning palates. Artisenal pizzas and plates of pasta are up for grabs, as are a variety of small plates like chicken paillard and the crab croquettes.

Don’t miss out on Zakarian’s signature burger if you have room for it; the Point Royal Ugly Burger is a lot – dry-aged double patty, bread and butter pickles, aged American cheese and remoulade – but it’s a must. Since this is a hotel restaurant, breakfast and lunch are also available if you can’t make it out for dinner.

Thus far, the restaurants we’ve mentioned have been on the more “upscale” side of things. Landshark Bar is the exact opposite: Come as you are and enjoy a wealth of casual grub and cool drinks. As the name suggests, Landshark Bar & Grill is heavy on the familiar fare you’d find at your local watering hole – but of a higher quality. 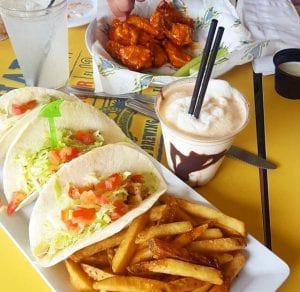 Buffalo Sriracha shrimp, chicken wings and pretzel sticks are just a few of the starters you can nosh on when hunger hits. Complement those small bites with some appetizing fish tacos or a fried shrimp basket, and you’ll be on Cloud 9 (and in desperate need of a nap).  You really can’t go wrong with the seafood here, but there are meat options available for the non-pescatarians in your life. The jerk chicken wrap and BBQ burger do the trick in that regard.

Because you’re at Margaritaville, it goes without saying that you should get the namesake drink. It’s offered in different variations, with one of our favourites being the smoked chipotle and grapefruit juicy fruit iterations. With regards to beer, all the usual suspects like Bud Light, Corona and Landshark (of course) make an appearance.